Letters to Our Sons – Steadfast and Unmovable

Letters to Our Sons 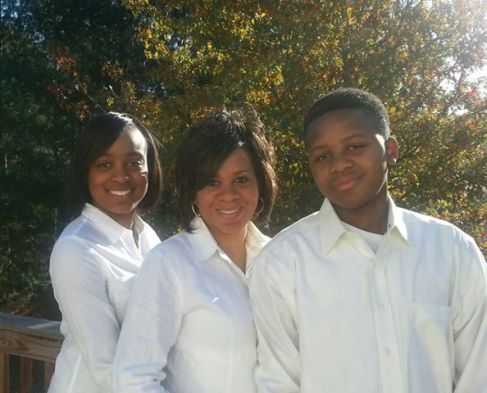 My mother would always comment on how busy I always seem to be, getting my children from school to sports practice then home to either cook or finish dinner depending on how my morning went.  Then start on homework or create a project that the kids announced was due the next day at 9pm the night before.  My son started earlier than my daughter in sports.  He was 5 years old running over other boys his age because he was always larger than the others. Our cycle was football; basketball, baseball then rest for a month then start it all over again.   As the kids got older, church activities were added to our “flow” then cheering for my daughter then she started playing soccer then volleyball!

On November 8, 2008, my world came to a nearly paralyzing halt.  After Julius, II (JJ) had experienced 4 straight nights of high temperatures every night after football practice, I decided on that Friday morning (just before the Youth Football State Tournament) that I needed to call the pediatrician about this fever.  I thought he had an infection, so my plan was to get him all medicated so he could join his team in completing their undefeated season on the field by Saturday.  When we got to the doctor’s office on Friday morning, our usually calm pediatrician looked at me in sheer panic when looking at his blood work.  She then sent us to the nearby medical center to make sure the results were right.  I started to panic a little, but didn’t want my son to panic so we just hung out since we “skipped” school.

Nothing could prepare me for the call I received and the trip back to the pediatrician’s office to receive the news that my little 8 year old athletic, baby boy had Leukemia, a blood cancer that at that time had only a little above 70% cure rate.  Our journey from 2008 to 2012 has been one of what seemed at times like insurmountable.  My son had just started the 3rd grade, his life was football and Legos.  How can I tell this child that he won’t play sports for 4 years?  That his hair will fall out, that he will not be able to go out in public at times because the average germ could kill him?  I could I have prepared myself for countless weeks in the hospital?  How could I explain to my 5th grade daughter that her brother has a very serious condition and she would understand what that really meant?  The daily doses of chemotherapy some of which I had to inject into my son’s frail body, didn’t defeat him.  There were times when I thought I could not take another transition from treatment to treatment, but God shielded me from things that I know would have destroyed me had I really understood all of what this cancer was and how it would affect my family.  Then one day I looked up and it was January 15, 2012, which was the official end of JJ’s cancer treatments.

In March of that year, the needle that was implanted in his chest for his chemotherapy was removed and he was cleared three weeks before football camp begin summer conditioning!  His return was  unbelievable and his team had an undefeated season….but my son’s record of being undefeated went far beyond the football field….. Satan thought he would defeat him, but JJ’s life record was also undefeated.  My role as a mother went deeper and my family’s life grew stronger.   Just after my son was born I would pray over him that he would find favor with man and that God will favor him.  I can’t tell you how precious and caring his spirit is to others and how others that really know him applaud his caring nature.  He adores his family and although he stands 5’9” wearing a size 14 shoe, he still loves to bear hug me and for me to kiss his cheeks when he goes to bed.  He is a gentle giant.   God saved him, rescued him and allowed him to recover so that his life would encourage others.  He is working on a book for young people particularly athletes to not lose hope if they find themselves in a health crisis.  I bless God for our journey.

Son, you outgrew my lap, but never my heart.

Letters to Our Sons Book

Yolanda Shields best-selling author has over 20 years of experience as a business leader and also does international workforce development and social entrepreneurship work in the continent of Africa and other 3rd World Countries. She is a much sought-after speaker and trainer in the area of small business, entrepreneurship, nonprofit startup and sustainability, fund development, grant writing, diversity, human capital management, career development, and social entrepreneurship. She has traveled extensively throughout the United States, France, and Africa. “I serve and guide individual solopreneurs or companies to new levels, expand growth and scale businesses to make a significant impact to produce an increased value that stands out among others. I love working in a collaborative way with leaders to translate business vision into strategic plans that are aligned to execute with excellence and sustainability”. She has earned a B.S. in Education and Social Work (APSU) MBA (HRM and Entrepreneurship). She has been appointed by Tennessee Governor Bill Haslam to the Statewide Disability Board and the Labor and Workforce Development Board for the State of Tennessee and Vice Chair the Oversight Committee. She has assisted over 20 corporations in the areas of fund development, talent development, strategic planning, executive coaching/training, business operations and celebrity charity management. She is currently a mentor at the Vanderbilt University Wond’ry Innovation Center. She has worked with such celebrities as CeCe Winans, Darrell Green, Art Monk, Tony Boselli, and many others. Yolanda’s first book released in September 2013 which included a 10 city tour in 2013-2014 across the United States, France and continent of Africa where she shared her inspirational book dedicated to “Mothers & Son’s” – “Letters to Our Sons” – A Mother’s Journey Raising Sons to Become Men with Character and Courage. Her 2nd Book focused on Entrepreneurship and Business Strategy released February 2016 “Entrepreneurship is a MindSet not a Storefront”. For more information on Ms. Yolanda Shields visit www.YolandaEShields.com To Book her Email Booking@YesBuilds.com
View all posts by lettertooursons →
This entry was posted in Uncategorized and tagged Letters, LisaMcCrady, mothers, Nashville, parenting, sons, yolandaconleyshields. Bookmark the permalink.